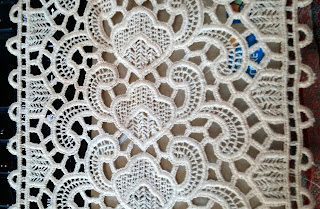 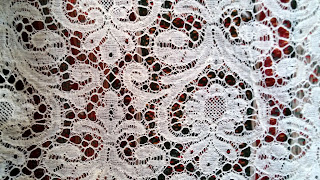 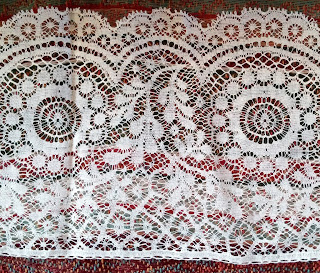 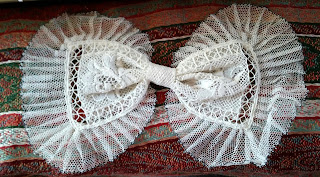 This was another treasure I got at the estate sale this last week. It was made by a Mrs. Harvey Moore when she was a young girl in Holland and given as a gift to Mrs. Beachy in 1939. I bought it on 28 May 2015. So now it has a history. (-; The estate sale owners thought so little of it and sold it for only $1.00. I was glad to get such a good price, but I'm fairly sure it is worth a little more than that. To be fair, the people running the estate sale had much finer pieces to worry about than one piece of stitched linen. There was a full page spread on the estate sale in the paper and they said it took 1-1/2 weeks to catalogue and price everything and the list was 57 pages long! 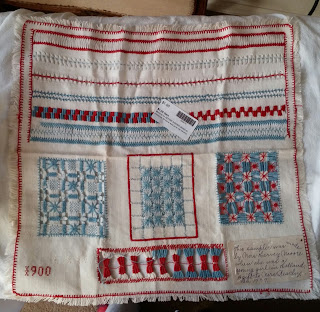 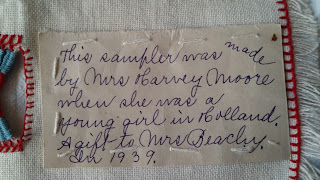 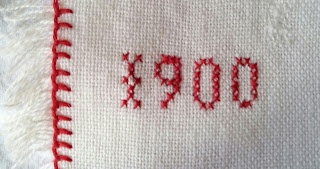 It is a leftover piece of linen judging from the darned repairs in it. In it she has different kinds of pulled and drawn thread patterns, needle lace, and some embroidery stitches as well. I don't know if the pulled and drawn thread patterns have specific names so if anyone out there can tell me I'd be grateful. I see she has some kind of twisted feather stitch I don't remember seeing before, a buttonhole stitch, and a couple of herringbone stitches -- one which is very fine. There is also some kind of cross stitch. I don't know how old she was, but I think she did well. I wonder what else she made when she got older? I'm very happy to be the new owner. Maybe some day I can try some of these techniques. 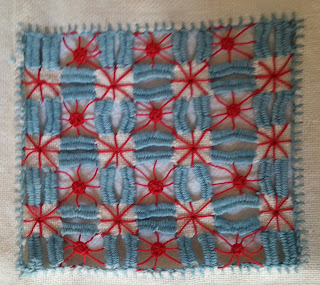 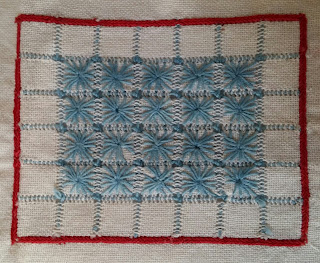 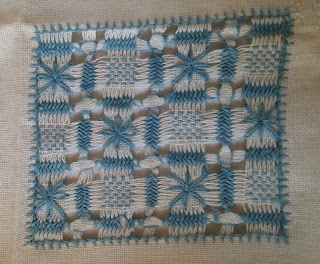 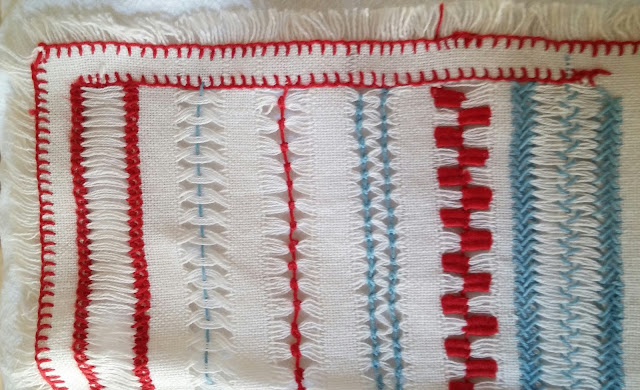 I got really lucky - Estate Sale

I went to a really nice estate sale this week. The house went on and on and on with room after room filled with some very old and wonderful items. There was room after room of goodies upon goodies! Many of the wonderful items were WAY beyond my budget, but on other items they didn't seem to know what they had. One of my most exciting finds was a silkie of Betsy Ross making the first flag dated 1915. There is one selling on ebay now for $125, but this is going in my box of patriotic goodies destined for a patriotic crazy quilt one day. My price was $10. (-; 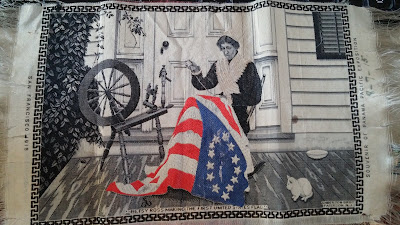 Then there was this helping hand or sewing bird which I've always admired when I saw them online, but didn't feel I could afford it. This was also $10. I found one almost like it online for $140 but it had a pin cushion. You pinch the tail and the mouth opens to grab onto something -- the third hand. 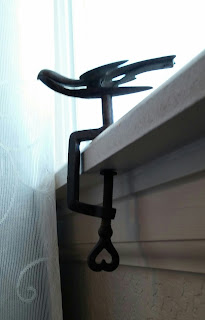 Another lovely item was this pin cushion. It was among a box of items that didn't have a price that he gave me for $30. I love the gold base. 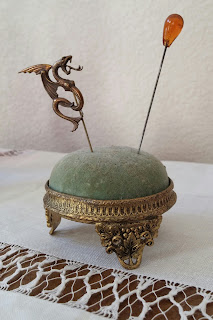 Also among the un-priced items was this sweet half doll that is only 1-3/4 inch high! For those unfamiliar, a half doll is often made into a pin cushion. The pin cushion becomes the doll's skirt. The half dolls can be fairly expensive so finding this one just tossed in a box of doll accessories unnoticed among a rather large antique doll collection was really special. 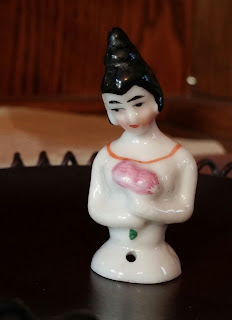 To say I was a little excited about these lovelies is an understatement! I will put in a few more blogs on this estate sale. I spent more than I usually do -- just couldn't help myself. It is not every day that you find so many vintage sewing items at such a bargain. There were so many more dear items that commanded enormous prices that these beauties were practically overlooked as potential income -- at any other estate sale they would commanded a higher price.

Posted by Connie at 7:47 PM No comments:

My knitting is coming along

This is my first shawl. I'm pretty excited about it. It is made from Alpaca wool and is so soft! It's nice and big too. The yarn is green but has bits of orange and teal in it. 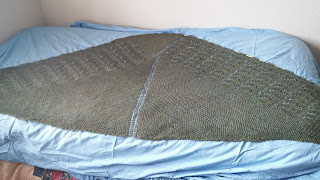 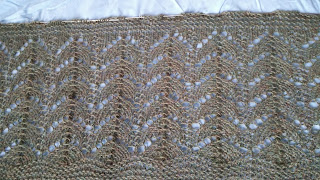 Carol K. and I exchanged handmade Christmas ornaments this year. The one I made for her is on the right and the one on the left is the one she made for me. I love it Carol! 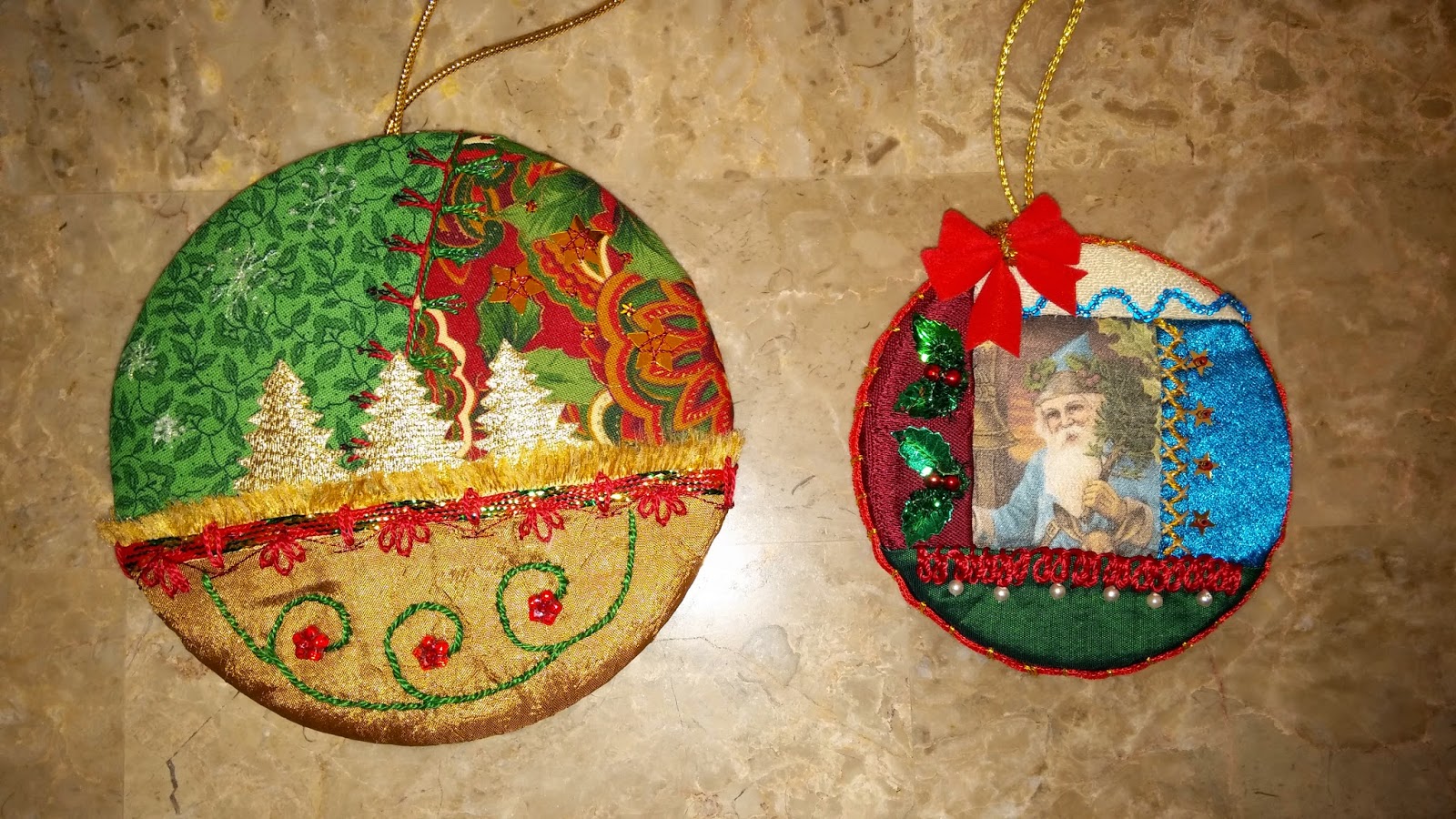 A neighbor and friend once told me that you could dye things with Avocados. I had heard of it before and so I started collecting pits and skins. I made a lot of guacamole and it was good. Then I put the pits and skins in a baggie in the freezer until I had many many small sandwich bags stuffed. What prompted me to get them out and finally use them was a bush in my backyard. I was out in the yard where my husband was trimming some bushes and noticed one of the bushes had some berries in it and so I decided to see if the berries would dye anything. I have a large plastic bin full of dye-ables that I have collected over the years -- some vintage crocheted pieces, silk ribbons, various threads, rayon ribbons, fabrics, etc. So out it came. These are all natural fibers (cotton, wool, silk) or a rayon mix. I searched online about dyeing with Avocados and got some great ideas from this website: http://hookedanddyed.com/2014/05/28/natural-dye-avocado/

I have a fair amount of dyeing experience and dyeing supplies myself, so I added some steps. First I cleaned anything that I was worried about taking the dye. Some fabrics have chemicals on them that prevent the dye from taking to the object you're dyeing. To clean these items I used a few tablespoons of soda ash in some water in a pan on the stove. I let the water get nice and hot but never boiled it. I stirred my fabrics and fibers in this concoction for several minutes. After the wash I put all the fibers and fabrics in a large bucket filled with a gallon of water and 1/2 cup of soda ash and soaked it for 30 minutes. Soda ash acts as a mordant and makes the dye somewhat permanent. I say somewhat permanent because some of the dye always washes out. It will look like it is going to be much darker than it will actually end up.

I got several plastic containers for the large pieces of fabrics and used mason jars for the smaller fibers. I decided to do 3 batches so I had 3 pans of water on the stove -- one with pits only (cut in half), one with skins only and one with pits and skins. I also had a 4th with the berries. At first I put the pits and skins in with the materials, but I noticed they were staining the fabric darker in places; some looked great and some not so great. This would be a great experiment later to purposefully make a batik type fabric and some of my fabrics did turn out like this. Eventually I removed all the pits, skins, and berries. I let them soak in the sun (or a warm place) for about 24 hours. I brought them in at night. The sun was too hot and evaporated some of the dye. It also burnt the fabrics on top where the fabrics were exposed to the light. If you don't live in Colorado and the sun isn't too bright you could probably get away with this. I ended up putting paper towels on top of the fabric to protect it, but I'll probably keep them inside next time.

After soaking for a day I took all the fabrics and fibers out of the dye and rinsed them in cold water. I let them sit in the cold water for a couple of hours and then rinsed them again. I did this over an over again until the water ran clear.

The berries turned out a nice grey-blue, the pits a pale pink, and the other two I am confused about. I'm very good about performing my experiments scientifically, but not so good about writing them down! One was slightly darker than the pale pink and another slightly darker than that one. I think the skins were the darkest. For some reason some pieces in each batch turned out pale peach. Also, some items really took the dye and were comparably really dark. There didn't seem to be any rhyme or reason to it. So many people are surprised that avocado dye things pink and such a nice victorian pink at that! I did not test the pH as it suggested on the link I referred you to.

I saved the dyes and added more fabrics to them and let them sit for another 24 hours. I added more soda ash to see what would happen. The fabrics-fibers turned much more peachy. I don't think I quite got the right colors in these photos, but they're somewhere in the neighborhood. (-; The first one is really more pink than that, a little more like the last one, but brighter. Maybe I should take pictures during daylight hours!

I liked how they turned out pretty well so I decided to put some together for a gift exchange we did at the Crazy Quilting International (CQI) Retreat. 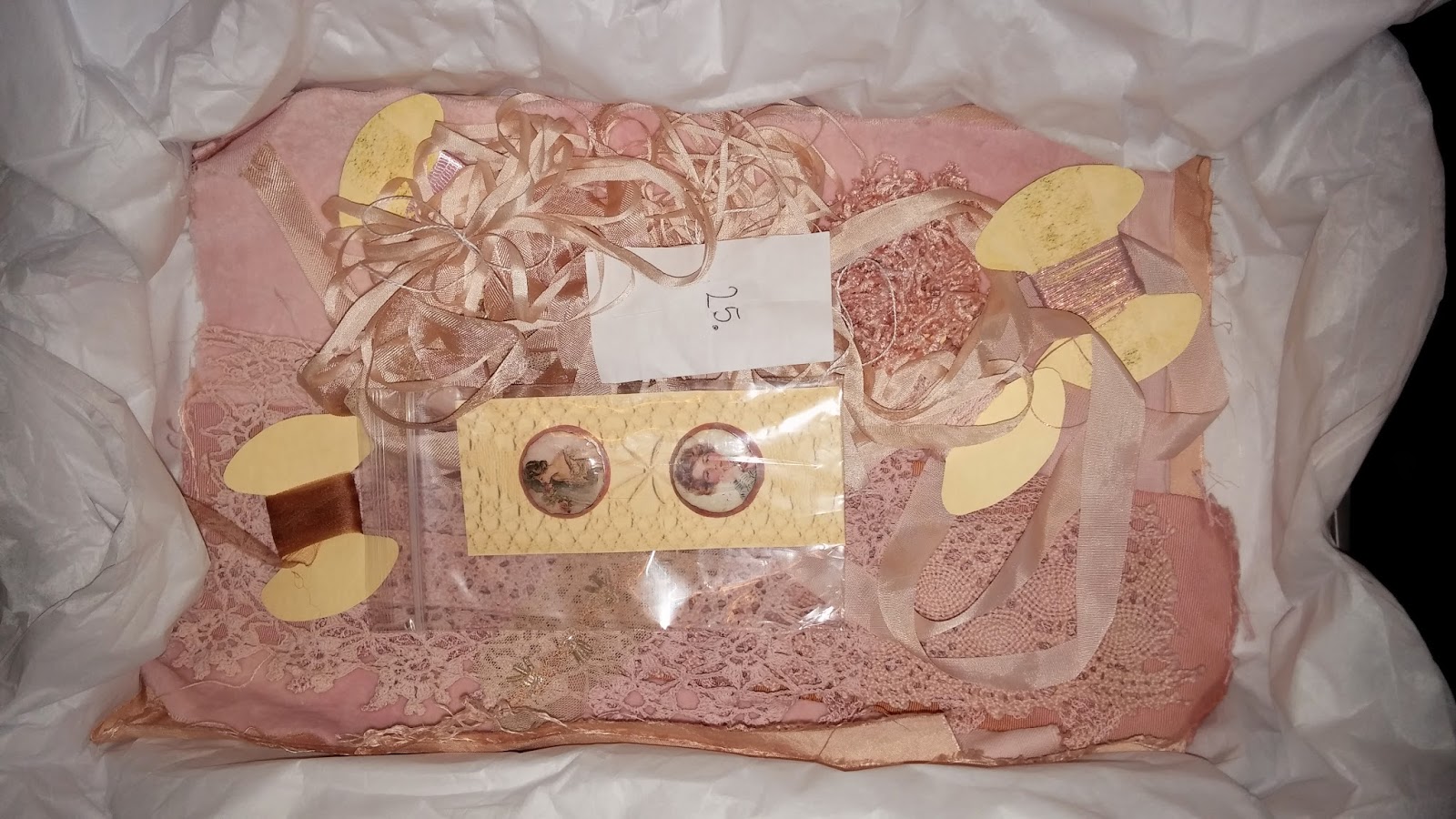 I have been working on Barbara Kershaw's Italian Drawn Thread design called Angelina. It is a fingertip towel that I turned into a placemat by working the design at both ends. I worked it as part of an EGA (Embroidery Guild of America) group correspondence course. Happiness is a completed project. 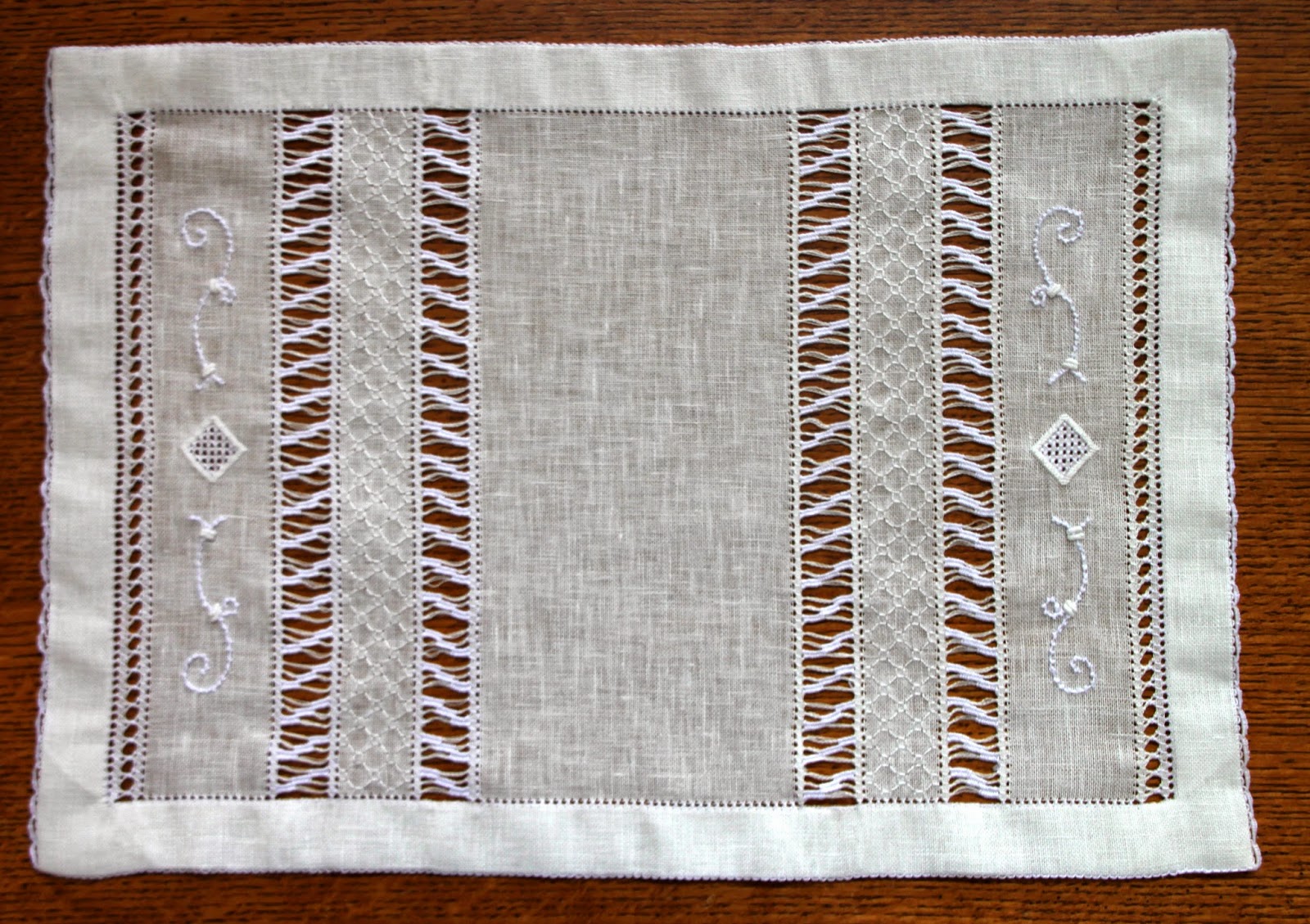 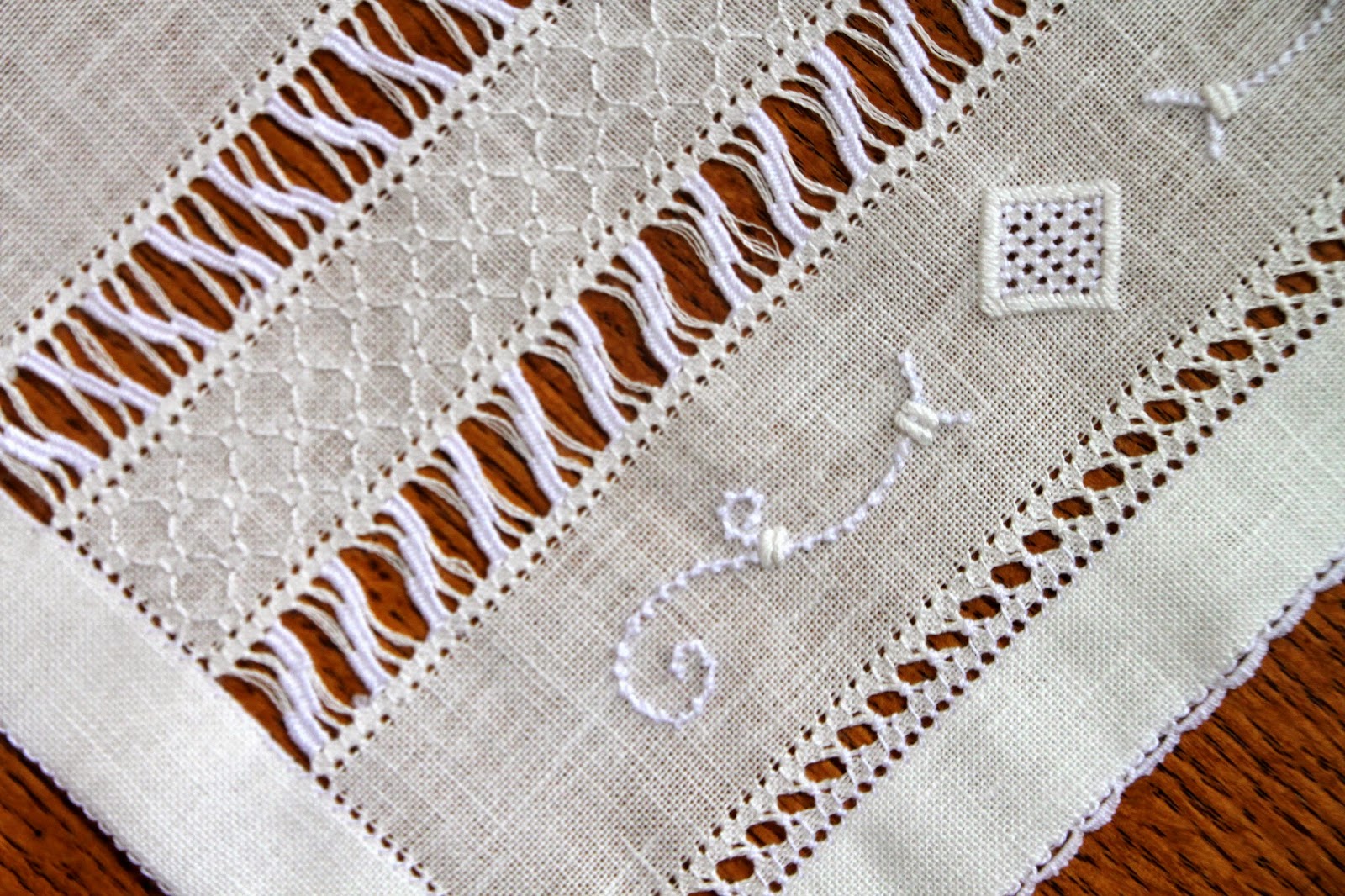 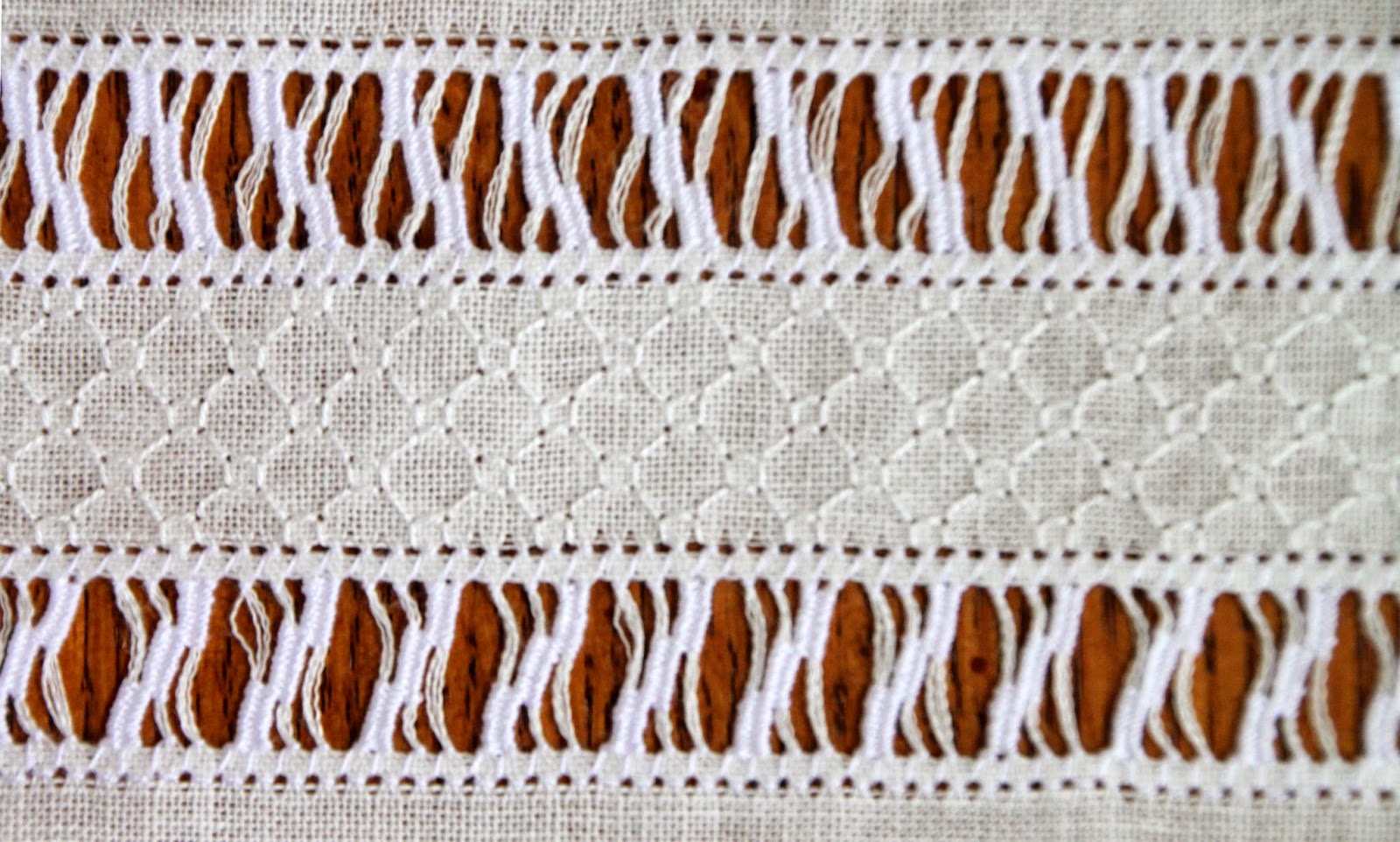 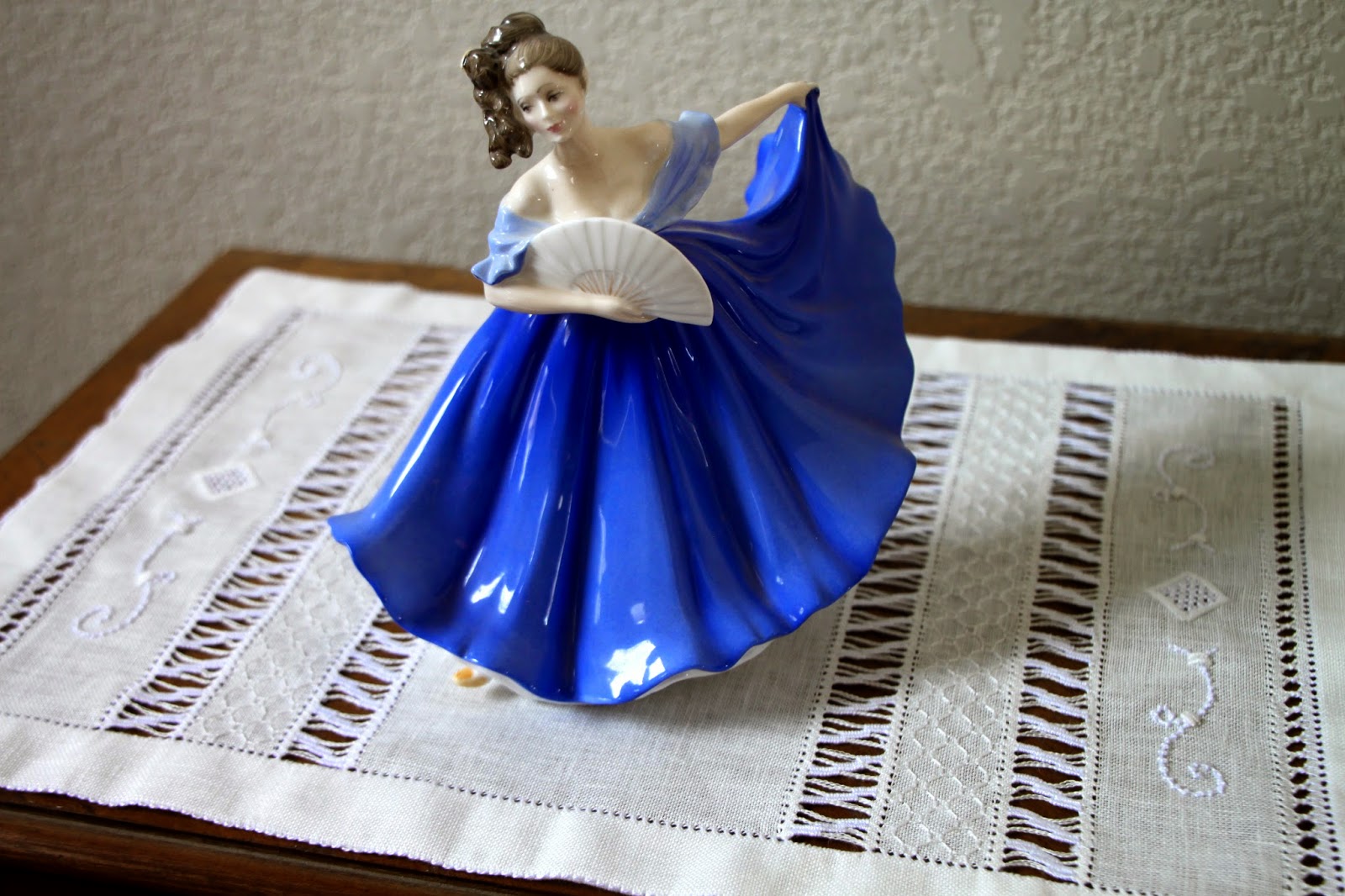 All photos and text are personal property of Connie L. Kalina. All rights reserved. Content of this site may not be reproduced, in any manner without written permission.

A great group I found! 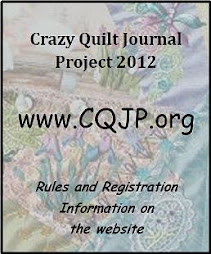